What is pink butcher paper and why is it used for BBQ?

We’ve all seen it at the meat department in the local grocery store when the butcher wraps your pork chops, steak, or burgers for you to carry home to the grill. Pink butcher paper is the classic go-to choice when it comes to wrapping and transporting, but did you know that it is also a fantastic alternative to aluminum foil during cooking?

In this article, we’ll discuss what pink butcher paper is, what it’s used for, and why it can be a BBQ enthusiast’s new secret weapon.

What is pink butcher paper?

Pink butcher paper is different from regular paper wrapping due to its added “sizing”. Made without a wax coating, sizing is a treatment added to the paper that acts like a vapour barrier to give it more strength and prevent it from falling apart when it gets wet. Pink butcher paper is designed for same-day use and is not intended for long periods of time.

How is pink butcher paper used in BBQ?

For decades, aluminum foil has been the go-to material for wrapping meats during cooking. Pitmasters wrap meats either close to, or at the end of the cooking time, mainly to protect the meat from drying out and losing moisture as it rests and holds at a lower temperature during service. It can also be used if the cook has gone quicker than expected, to try and slow down any further darkening of the bark/exterior crust.

Why use butcher paper instead of aluminum foil?

The primary reason that pink butcher paper has become more widely used amongst the BBQ crowd is, when it comes to wrapping meat, has certain advantages over aluminum foil:

Why is pink butcher paper popular among BBQ enthusiasts?

Pink butcher paper came to the spotlight by Aaron Franklin, owner of Franklin Barbeque in Austin, Texas, the James Beard award-winning brisket guru whose restaurant is famed not only for its meat but for the five-hour lines.

Where to buy pink butcher paper

Unlike foil, using pink butcher paper lets moisture escape, preventing over steaming, while still protecting the meat from the full impact of the smoker, allowing in a more smoky flavour. Pick some up today and impress your friends with a new BBQ technique designed to give you perfect results. 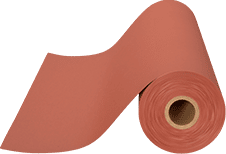