The flavors of a Philly Cheese Steak combined with a juicy bacon-wrapped beer brat are a match made on the grill! Want to bring your grill game to a whole new level? Check out this easy-to-follow recipe and see what our Honey Dijon Barbecue ‘n Brat Sauce can do when you bust out the basting brush!

Begin by placing 2-4 bottles of beer in a stockpot on the stove (enough to cover the number of brats you are cooking). Place brats in beer and bring to a rolling boil, then turn off immediately and remove bratwurst to at least cool to the touch.

Slice down the middle of the bratwurst and stuff with thick slices of Swiss Cheese. Wrap each brat with 2 slices of roast beef, then wrap with enough bacon to cover the brat (about 2 slices).

Place on 300°F smoker for approximately 30 minutes or until the bacon begins to crisp. If using a grill, simply place the brats over indirect heat to prevent flare-ups. A higher temperature grill or smoker works fine and will speed up the cooking process, it’s simply important to remember to prevent the rendered bacon fat from dripping into the flames. Baste the brats with the Brat Sauce and allow the sauce to set on the meat for 10 minutes before removing.

While brats are on the grill or smoker, saute green peppers and onions in 2 Tbsp Olive Oil until the onions become slightly translucent and the peppers become soft. Keep warm until ready to serve.

Place brats in bun and top with peppers, onions and load on additional Honey Dijon Barbecue ‘n Brat Sauce. Forget the plain old bratwurst at your next cookout – this recipe is a keeper!

Sauce and rubs available here, click on this link. 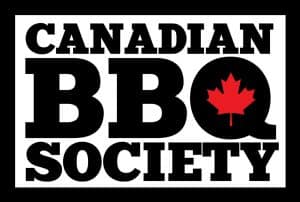 Click here to become a member of Canadian BBQ Society and receive a 15% discount off online orders!

Learn more about our partnership with the Canadian BBQ Society